We thought of checking out this (relatively) new Iraqi restaurant while we were in town. The fifth branch of the Samad Group Restaurants and the first outside of Iraq, the interior of this place has been designed to reflect the authenticity of the cuisine they promise to serve. While you wait for your order to arrive, they indulge you with lentil soup – which tasted pretty good, a platter of veggies and of course some Iraqi bread. The second round of bread brought a rather interestingly shaped variety. However, it was the first bread – thinner, slightly crisp and with sesame seeds – that tasted better. And hence was obviously the more popular choice at our table. 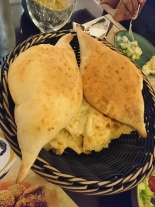 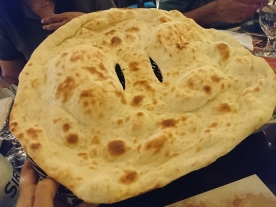 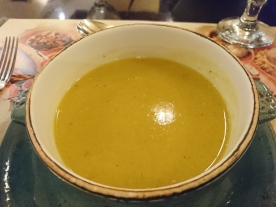 We ordered a portion of Hummus (AED 23) to go with the bread and fresh veggies. I wouldn’t say it’s the best hummus I’ve ever had, but it was pretty good. Nice and smooth, not overwhelmed with chickpeas or tahini – although a little more flavour of both wouldn’t do any harm. It went well with our preferred thinner bread.

One of our mains was a Shawarma Chicken Dish (AED 65). This was quite delicious. The chicken was well-seasoned and gave off great flavours on the palate. It was easy to enjoy. It was also good to see that the accompanying fries were not too oily and the tomatoes and greens looked fresh. The garlic mayo that came with it was fine too – always a good dip for fries.

Our second mains was a Hamour (AED 145 by kg). Although the top of the fish was alright and grilled to a nice degree of roasted softness, the bottom half of it was quite charred. Which obviously reduced the amount of consumable fish in the dish. And which also breathed an excess of smokiness into the rest of the fish. Not my favourite dish of the night. In fact, I don’t think it was particularly anyone’s favourite.

The final mains was an Iraqi Kebab (AED 75). Now this dish gave us the impression that these guys do their kebab right. Here were three succulent, well-marinated and perfectly grilled chunks of kebab that we all enjoyed and unanimously agreed were really good. The bread on which the kebabs had been placed had absorbed the flavour from the meat and were nice to nibble on on the side too. Clearly, they knew what they were doing!

At the end of the meal we ordered black tea, which came accompanied by some sweets – sugar and sesame coated dates and coconut topped biscuits. I shall leave a picture of them here for your perusal. All in all, this place was an interesting find – definitely worth the visit. 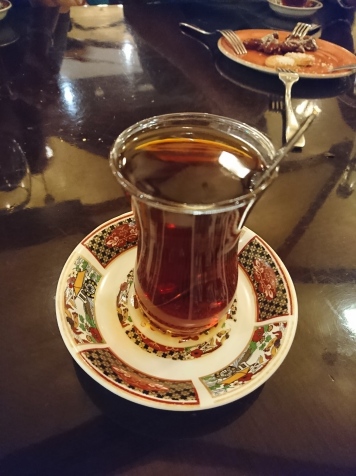 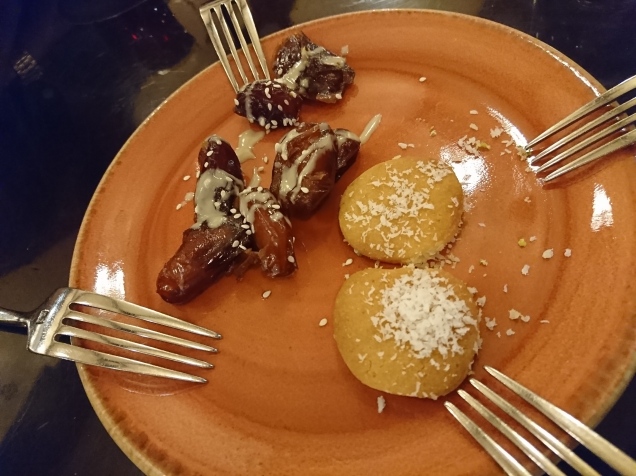 Black tea accompanied by some sweets