It was pretty exciting to learn that Flamingo House had started doing lumprais. (I do like their food! https://theeatlog.com/2017/12/27/flamingo-house/) They had advertised two varieties – wild boar and prawn, both priced at LKR 800. They deliver within Colombo. We got a take away. On this particular occasion, we decided to try the wild boar. We were told, however, that it was regular pork and not wild boar that we would be served. I didn’t mind, but my partner in crime definitely came for the wild boar – too bad! 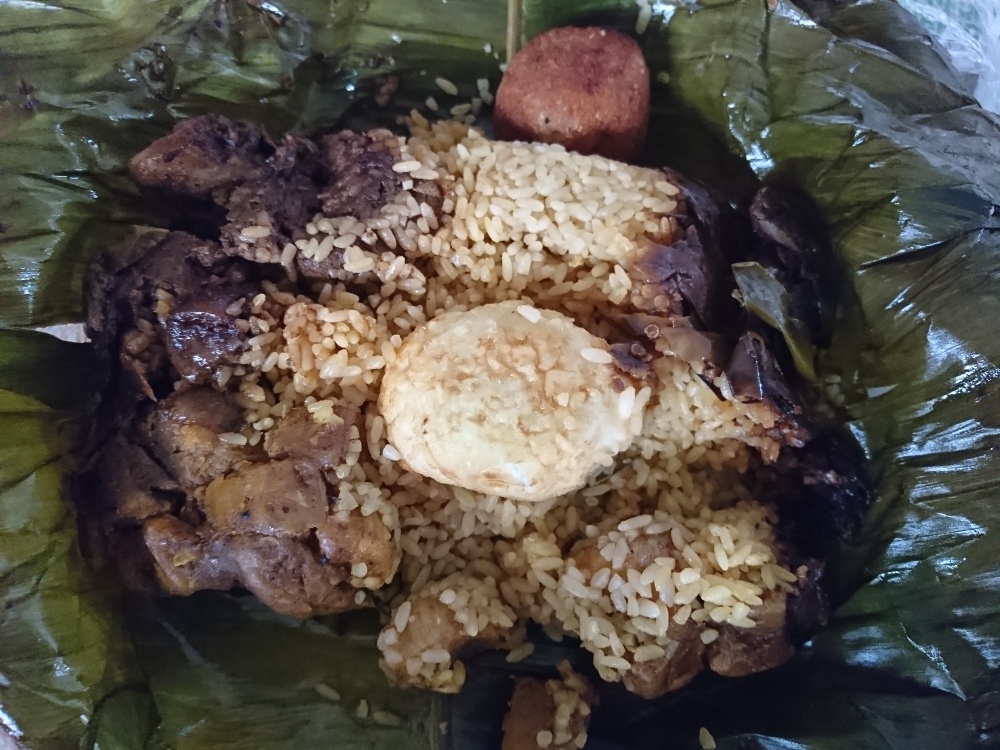 The packet comprised a sensible portion of rice (I’d say somewhere around the quantity of VOC Café’s lumprais – perhaps slightly extra) with ash plantain, brinjal, seeni sambol, an egg, a fish cutlet (or what some prefer to refer to as a frikkadel) and – of course – pork. The egg was harder than I would have liked it to be – probably slightly over-boiled before frying – but, as usual, I like it when there’s an egg in my lumprais. The cutlet was actually quite tasty, well-seasoned. The ash plantain, brinjal and seeni sambol were fine too. I was glad to see that they didn’t have an excess of oil that leaves you feeling full for the rest of the day. Somewhere in there, I tasted a bit of belacan too – clearly in a serving size so small that I didn’t even see it despite rummaging through my packet before eating. Definitely would have like to have more of that! And finally, the pork – the quantity wasn’t all that large, which wouldn’t have been too big a problem had half of it not been pork fat rather than meat. For someone who doesn’t eat the fat part, this disappointed me. It tasted alright though.

So. Value for money? Hmmm. Yes, I would expect prawn or wild boar lumprais to be a little pricier than your standard chicken lumprais. Plus, when you look at Flamingo House’s menu, this would come across as quite a reasonable price. But well, this wasn’t wild boar, and it wasn’t all meat. And when compared to somewhat similar packets (LKR 545 at VOC Café – https://theeatlog.com/2017/09/24/voc-cafe-dutch-burgher-union/, and LKR 500 at BreadTalk – https://theeatlog.com/2017/09/02/breadtalk/), this price does seem a bit hiked up. Part of me says this isn’t a sensible comparison due to the different natures of the sources. But part of me also feels like it makes sense to compare due to the similarities in the matter. Was this a cut above the rest? I didn’t think so. Was it worth it anyway? That’s a fine line to tread, weighing in all these factors. Was it?